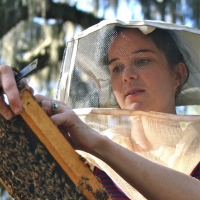 Increased honey bee, Apis mellifera L., colony losses and dramatic pollinator decline are occurring worldwide1,2. Pesticides, parasites, and pathogens are considered the primary causes of these declines. A substantial amount of research has focused on determining the extent to which various pesticides, parasites and pathogens affect honey bee health. However, experiments conducted within a honey bee hive are biased by many uncontrollable factors such as: colony strength, weather conditions, food availability, ect3. Much of this bias can be overcome by in vitro rearing honey bee larvae in the laboratory.

Vast differences exist between the physical and social environments of colony- and in vitro reared honey bee larvae. Natural brood care within the hive is intensive. An individual larva may be visited by nurse bees as many as 2,785 times during its development4. In contrast, in vitro reared larvae are maintained in a solitary chamber that deprives the larvae of social and physical interactions with nurse bees. Additionally, in vitro reared bees are fed once a day, compared to colony-reared larvae who are frequently fed small amounts of food by the nurse bees tending to them.

There have been significant improvements in in vitro rearing methodologies since the first protocol was development in 19335. Very high survivability can now be achieved in the laboratory6. However, very little research has focused on the effects of in vitro larval rearingon adult honey bee physiology, and no behavioral analyses have been conducted. There are substantial differences in the environments in which in vitro and colony-reared larvae develop. The potential effects of in vitro rearing on the physiology and behavior of the resulting honey bees has not been well explored.

It is imperative that in vitro rearing be tested to determine if adults who were reared in vitro are comparable to colony-reared adults. In vitro rearing can be considered an accurate representation of larval development if honey bees who were reared in the laboratory are shown to be normal. This would allow in vitro rearing to be used as a powerful tool to evaluate pesticide and pathogen exposure in immature honey bees3,5,7. However, special considerations will be required when interpreting the results of studies using in vitro rearing to assess the risks associated with pesticide and pathogen exposure if bees that have been reared in the laboratory are abnormal.

The goal of the my doctoral research is to determine if in vitro rearing alters the physiology and behavior of adult honey bees. I hypothesize that larvae that were in vitro reared will develop into seemingly normal adults that differ in physiology, behavior, and key morphometric parameters from adults reared by a colony. I will address my research goal with the following objectives:

Objective 1: Compare the morphology, physiology, and behavior of in vitro and colony-reared workers. Ten colonies will be used to produce the larvae for in vitro rearing. Additionally, each of the 10 colonies will rear brood within the hive. At adult emergence, in vitro reared and colonyreared individuals from each colony will be compared in a combination of laboratory and field experiments. Within the laboratory key morphological features (such as wing length, corbicula presence, stinger development) will be measured. Additionally, behavioral assays to identify potential differences in trophallactic feeding and queen retinue formation will be conducted in the laboratory.

Both in vitro and colony-reared individuals from each hive will be marked with queen labeling discs. These bees will be introduced into observation hives and their progression through hive jobs will be recorded. Pending funding approval, we will use RFID tags to monitor foraging flight behavior (e.g. age they begin foraging flights, number of flights a day, duration of each flight). Finally, I will create new colonies from groups of bees that were in vitro reared and compare their success to colonies created from groups of naturally reared bees.

Objectives 2 & 3: Develop a technique for in vitro rearing drone honey bees, and compare the morphology, physiology, and behavior of in vitro reared and naturally reared drones. Rudimentary in vitro rearing has been conducted to study differences between diploid and haploid drones. The protocol to rear worker bees has remarkably high survivability rates. Therefore, I will use this method as a starting point and make slight modifications to achieve acceptable drone survivability. The first modification will be to collect larvae from drone cells rather than worker cells. Additionally, I anticipate the volume of diet per feeding and the total number of feedings will be increased.

As with my previous experiments with worker bees, I will collect larvae for in vitro rearing from 10 colonies and those same 10 colonies will also rear their own drones. In the laboratory I will compare the morphology of in vitro and naturally reared drones. I will also compare their reproductive potential by analyzing the sperm quantity and quality. In addition to the laboratory trials, I will mark individual drones with queen marking discs and introduce them into observation hives to observe their behavior within a colony. Pending funding approval, we will RFID tag individual drones and monitor mating flight activity (e.g. age they begin mating flights, number of flights a day, duration of each flight).

Objective 4: Develop a technique for in vitro rearing queen honey bees. One frequently encountered problem with previous protocols for in vitro rearing worker is the production of queen/worker inter-caste individuals. The problem of queen like individuals has been overcome by implementing variable diet compositions throughout larval development and limiting the amount of food given to each larva5. I plan to in vitro rear queens by increasing the volume of diet provided to each larvae and modifying the diet contents to increase royal jelly contents.

In vitro and naturally reared queens will be produced from each of 10 colonies. The morphology (e.g. spermatheca presence, wing length, ovariole number) of the resulting individuals will be compared. Additionally, in vitro reared queens will be introduced into mating nucs and observed to determine if they can successfully mate and begin production of viable worker offspring.

Presently, I am working on Objective 1. I am comparing colony and in vitro larval survivability and screening for pathogen presence in in vitro and colony-reared individuals to identify the ideal colonies to use during the study. Additionally, I am rearing workers that will be dissected for morphometric comparisons. I have also conducted a few trials working towards rearing queens and plan to continue trouble shooting the queen and drone rearing protocols throughout the fall.