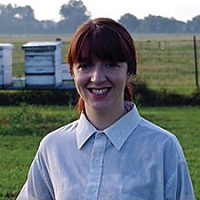 Maria Kirrane is in the final year of her PhD program at University College Cork in Ireland. She holds a bachelor's degree in Ecology, her main interests being the effects of invasive species on ecosystems. This, combined with a fascination in honey bee behavior, led her to pursue research in the area of the varroa mite. Her PhD research investigates grooming and varroa sensitive hygienic behaviors in Russian and Italian honey bees. Maria hopes that by gaining a better understanding of these behaviors it will be possible to better detect and breed for them. She is co-supervised by Dr Lilia de Guzman at the USDA ARS Honey Bee Breeding, Genetics and Physiology Laboratory in Baton Rouge, Louisiana and has spent two summers carrying out experiments at this lab.

The parasitic mite Varroa destructor Anderson & Trueman (Mesostigmata: Varroidae) is still regarded as one of the greatest threats facing honey bees, Apis mellifera L., worldwide (Le Conte et al., 2010). Varroa Sensitive Hygiene (VSH) and grooming are considered the most promising behaviors in the breeding of bees more tolerant to this parasite (Rinderer et al., 2010). The aim of my research is to gain a better understanding of these behaviors and thereby, improve their detection, ensuring more effective inclusion in breeding programmes. I am achieving this by studying one of the few honey bee races that has been found to naturally defend itself against the parasite; the Russian honey bee. This bee originated in far eastern Siberia, where the host shift to the western honey bee first occurred. It has therefore lived in the longest association with varroa and is believed to have evolved resistance. My experiments compare the responses of resistant Russian bees and susceptible Italian stocks in order to better understand resistance.

My experiments are based on a number of research questions, namely:

Answering these questions will lead to a better understanding of both behaviours as well as how they interact with one another. This, in turn, should enable both researchers and beekeepers/breeders to improve detection of VSH and grooming, making their inclusion in breeding programmes more achievable and effective.

To date, I have determined that Russian honey bees do display varroa-sensitive hygienic behavior. I found that VSH breaks the normal synchrony in varroa reproduction resulting in female only offspring and thereby affecting future reproductive output (Kirrane et al., 2011). I also found that young mites are more likely to be groomed when compared with adult phoretic and gravid mites (Kirrane et al., 2012). This indicates the importance of a sclerotized carapace in the ability of the mite to withstand honey bee defense.

I plan to submit my thesis in the summer of 2014 and hope to continue researching honey bee health in the future. I am very grateful to the Foundation for the Preservation of Honey Bees for awarding me a scholarship and enabling me to travel to the American Beekeeping Federation convention in Baton Rouge, La.