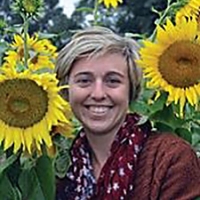 Katy Evans is a second year Master's student at the University of Delaware Wildlife and Entomology department working with Dr. Deborah Delaney. Her apiculture career began in 2008, when she began working on a project that was investigating an alternative method of African bee identification, and Automatic Bee Identification System (ABIS). This led to her becoming a certified African honey bee lab technician for the Florida Department of Agriculture and Consumer Services. In between her undergraduate and graduate degrees, she worked as a research assistant investigating gene expression in both developing maize kernels and Sclerotinia sclerotiorum, and as an apiary assistant working on multiple projects focused on small hive beetle and varroa mite control. Her current project is titled 'An Integrated Program Using Non-Chemical Controls to Manage Parasites in Honey Bee Colonies'. This project is approaching its third field season in the spring of 2014.

Beekeeping continues to gain popularity across the country despite the numerous pests and pathogens present in honey bee populations in the United States. The effects of these pests and viruses hit the mainstream public in 2006 when a wave of colony deaths plagued the nation and since then, the beekeeping community has continually suffered a 20-33% annual loss of overwintering colonies. Colony decline has not been directly linked to one factor, but evidence shows that the varroa mite, Varroa destructor, an ectoparasitic brood mite, is one of the primary causes behind the decline. Many treatments are available for varroa control, although few have yielded long term success.

Therefore, there is a need to explore alternative beekeeping management strategies. The goal of my project is to develop and test the efficacy of an Integrated Pest Management (IPM) program to manage varroa mites and varroa vectored viruses. Specifically, it will test the efficacy of splitting and swarming of colonies in conjunction with drone brood removal on reducing mite populations. Historically, beekeepers have tried to prevent their bees from swarming. They thought the process was detrimental to honey production and pollination, but existing research shows that colonies allowed to swarm show lower mite numbers and decreased bee mortality. My research focuses on non-chemical ways to manage varroa mites in small apiaries and aims to provide good management tools for small-scale beekeepers.

If effective, this strategy will be developed into an IPM practice for hobbyist beekeepers that will reduce the amount of time and money spent on varroa control treatments and alleviate the need for additional control tactics. I still have one more field season, but the results to-date are promising and the data collected will be valuable for long term management of bees. Results from this work will lead to a greater understanding of the relationship between varroa mites and honey bees and provide a basis for sustainable honey bee management techniques.